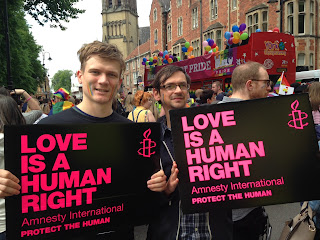 On Saturday 18 June, thousands of people, including members of our group, gathered outside York Minster for York Pride, the annual event which promotes equality and challenges discrimination based on sexual orientation and gender identity. They paraded through the city centre to the racecourse on the Knavesmire, where, for the second successive year, our group had a stall. 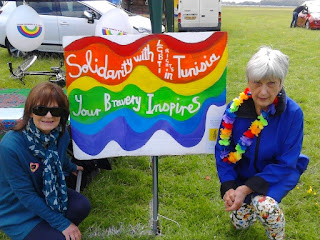 Members of the public posed for our "photo-action" to express their solidarity with the LGBTI (lesbian, gay, bi-sexual, transexual and intersex) community in Tunisia, where same-sex sexual relations between adults are against the law.

The following week our group joined in the celebration of Refugee Week taking place throughout Britain. On World Refugee Day itself (20 June), City Screen cinema in York showed three films, "Precarious Trajectories: Voices from the Mediterranean Migration Crisis", "Seeking Asylum" and "Blue Moment", followed by questions and answers with the directors of the films. Our group had a stall in the foyer, where members of the public, including the Lord Mayor of the City of York, signed a petition asking local members of parliament to call on the Prime Minister to urgently amend the immigration rules to help more refugees to be reunited with family members in the UK. 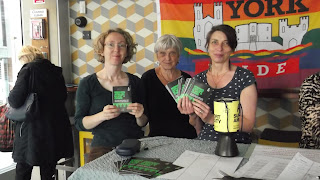 On Saturday, our group had a stall in Exhibition Square, outside York Art Gallery, in conjunction with Refugee Action York and the British Red Cross. Our installation spelt out the word WELCOME using worn-out shoes - to represent refugees' journeys. 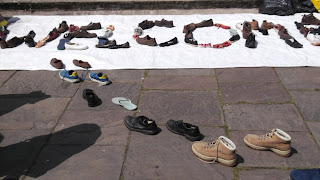 On Sunday, our group co-organised an interfaith service at the Unitarian Chapel on St Saviourgate in York. The Lord Mayor of the City of York (Dave Taylor) in his regalia was among those who attended. 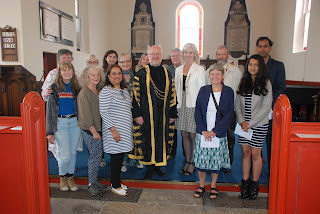 At our monthly meeting in June, William Roche, David Sylph and Marilyn Crawshaw presented the work of SMUG (Sexual Minorities in Uganda) in Uganda which campaigns on LGBT rights and provides safe houses for LGBT people at risk.  Uganda is vehemently homophobic in society and in law with the support of the church and also American evangelical preachers.  The state uses the LGBT community to divert an impoverished population from criticism of the government. The work is more than dangerous. SMUG is also the umbrella organisation of 18 smaller LGBT NGOs in Uganda. International pressure has had and can have some effect in preventing a worsening of the situation.

York supporters raise money for SMUG on a regular basis as well as providing moral support.  Marilyn has visited SMUG in Uganda and confirms that all money is well spent.

Members of our group signed up to receive further information on support / fund-raising for SMUG and / or the befriending scheme.

Our group's next monthly meeting takes place on Tuesday 12 July at 7.30pm at the usual venue: York Friends Meeting House on Friargate.