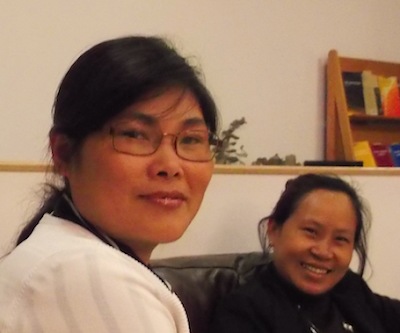 North Korea is a totalitarian state where tens of thousands of people are enslaved and brutalised. Jihyun Park (pictured, on the left) escaped twice from North Korea and now has refugee status in the UK where she works for the European Alliance for Human Rights in North Korea as North Korean Outreach and Project Officer. She fled near-starvation in North Korea to China, only to be torn away from her son and forced back to the country she fled and imprisonment until her second successful escape. On 18 October she told her story to a diverse audience of about 75 members of the public at our event at York Friends Meeting House - and answered their dozens of questions. Most of them signed a petition calling on the government of North Korea to allow the people of North Korea to communicate freely with the outside world and to have access to the internet.

The evening started with a showing of Jihyun's powerful video made by Amnesty International UK. You can watch it here:

Our group's next monthly meeting takes place on Tuesday 8 November at 7.30pm at the usual venue (York Friends Meeting House on Friargate).